A glamorous elopement in Italy.

During the years, more and more couples choose to elope instead of a big affair. there are endless possibilities about where to celebrate your ceremony. Basically, it means that you have more flexibility in terms of what you want to do and how.

Some couples decide to share their vows with some members of family and friends some others don’t and decide to celebrate just between the two of them. the beauty of this celebrations is the possibility to combine traditional and non-traditional elements. Jessica and Richard glamorous elopement in Italy was one to remember. 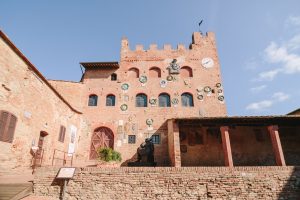 This amazing couple travelled all the way from United states for the most emotional and glamorous elopement in Italy. They wanted to have an intimate experience in the Tuscan countryside. An elopement in Tuscany was the perfect choice for them! While thinking about their wedding, they decided to include also some members of the family in their big day. Richard and Jessica shared their vows with the most important people in their lives. 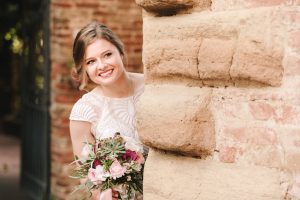 The wedding gown and the suit.

The wedding attire was something unique. It was perfect for this intimate ceremony. Jessica, wore a soft lace dress with cap sleeves. The intricate lace details, the simple silhouette and a bohemian feeling, were simply perfect for this bride. She truly looked gorgeous. To complement the look a stunning bouquet. Considering that was an elopement and to avoid too much formality, Richard wore a slim fit light grey suit. 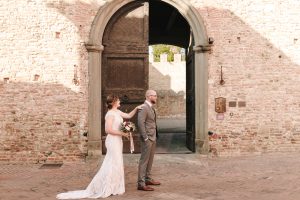 The ceremony and the glamorous elopement in Italy.

To elope doesn’t mean not to do things that are common in big affairs. After getting ready in one of the apartments of the city centre, Jessica and Richard had their first look in the historical narrow roads of the old village of Certaldo. 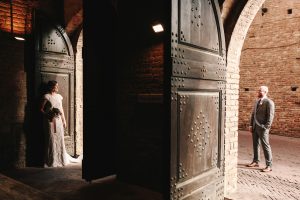 The warm colors of the walls, the brick and the natural atmosphere of the place did the rest. As a background, this couple, had the hidden spots of the village, were taken some magical portraits of this lovely couple. they also took advantage of an Ape parked in a secondary square. The result was something magical.

They walked together at the ceremony where the guests were waiting for them. Imagine celebrating your wedding in the beautiful old palace of power of the village. Surrounded by the historical architectures and the coat of arms of all the families that run the city. 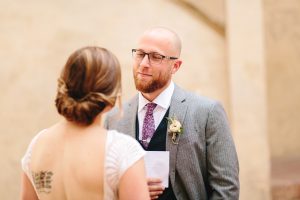 The ceremony was a civil wedding, performed by the delegate of the major in Palazzo Pretorio. After the legal part, Richard and Jessica, decide to exchange vows and make new promises for their future. Have the opportunity to say your vows in a unique place, such as Certaldo, it was so special to them. 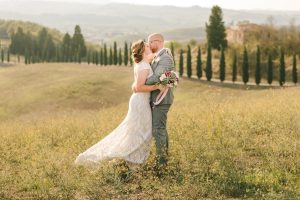 A particular emotional moment was the exchange of the rings. Personally, handcrafted by a goldsmith in Florence, on Ponte Vecchio.

While this two were taken by the photographer in the countryside for some couple shoots. Rolling hills, cypress trees, boundless views, that’s what is the Tuscan landscape. The guest, while waiting for Richard and Jessica to get back, enjoyed some relaxing moments in a local bar, sipping prosecco and chianti and taking selfies with the view. 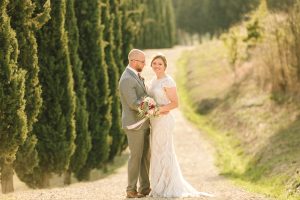 When the two newly wed come back from the photo session, a delicious dinner was waiting for a them in a local restaurant. True Italian pasta and Chianti wine were at the centre of this wedding reception. 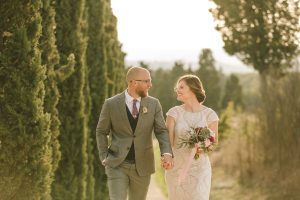 Precious memories came from this glamorous elopement in Italy. Jessica and Richard did exactly what they wanted during their day. They couldn’t be happier for the time spent with their families in Certaldo.